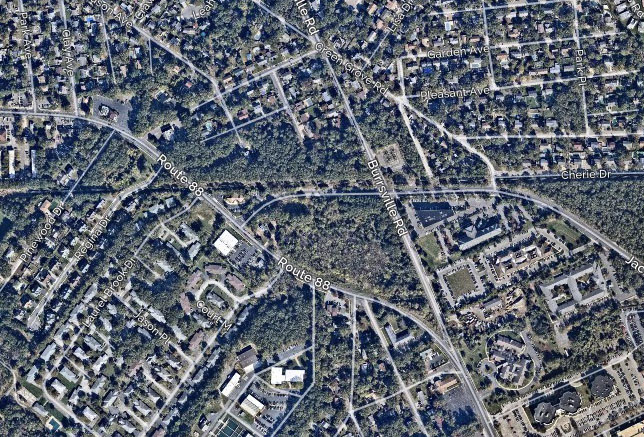 A plan to build a hotel on a triangular-shaped piece of property near a busy Brick intersection has been formally scrapped, with the property’s owner now proposing a newly-designed project that includes additional apartments and retail space, but drops the hotel portion.

Kamson Corporation, the owner of the lot which sits between Route 88, Burrsville Road and Jack Martin Boulevard, has submitted a new application to Brick officials that will be heard by the township’s Board of Adjustment next month, according to Township Planner Michael Fowler.

The company, which proposed a mixed-use development consisting of a 103-room Marriott hotel, 66 apartments and 39,475 square feet of retail space in 2015, dropped the plan after jurisdictional issues forced it off the planning board’s agenda. There were numerous objectors to the proposal, including neighbors who cited fears of an increase in traffic and wastewater runoff, as well as the owner of an adjacent property who said his land was being utilized for the project without his permission. Ultimately, an argument made by land use attorney Ron Gasiorowski, representing 545 Brick Boulevard LLC, filed a lawsuit arguing the case should be heard before the Board of Adjustment instead of the planning board. The application effectively died after the lawsuit was filed, but this time Kamson has applied directly to the Board of Adjustment.


The revised plan calls for the same amount of retail space from the original proposal – 39,475 square feet – but increases the number of apartments from 66 to 92. The hotel portion of the project is no longer part of the application, Fowler confirmed.

The name of the development, which would span a 9.3 acre parcel, would be Bay Pointe Village. It would consist of two buildings, both with first floor business and retail space with apartments above, Fowler said.

The revised application is likely to generate a similar level of scrutiny as the first. Mayor John Ducey has said, on numerous occasions, that he cannot comment on pending proposals before the township’s Board of Adjustment, as his statements could potentially be used in court if the case ends up in litigation. He has, however, said the property was rezoned in 2007 to allow mixed-use development under an agreement made between a prior mayor and council and state officials. That site is one of just two sites in town where mixed-use apartments would be allowed – the other is the Riverwalk shopping plaza, which is unsuitable for such a use.

The hearing on the application is currently scheduled for the June 20 Board of Adjustment meeting, which begins at 7 p.m. at the township municipal complex. Public input is allowed, but only after both the applicant and potential objectors have presented their cases, a process which sometimes takes more than one meeting.