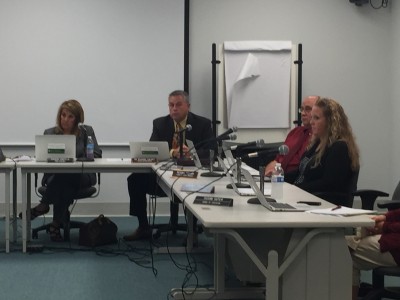 Suspended Brick schools superintendent Walter Uszenski lost his pay one day after his indictment on charges of official misconduct and theft, part of an alleged scheme to provide his grandchild with educational services to which she was not entitled.

The Brick Township Board of Education voted unanimously to suspend Uszenski without pay at an emergency meeting Wednesday night. He was previously suspended with pay following his arrest on the charges in May. Board attorney Jack Sahradnik has said state law allows a board to take away a employee’s pay only after he or she is indicted by a grand jury.

Sahradnik advised board members against commenting on the issue, but provided a few options going forward that could result in the early termination of Uszenski’s contract, which ends June 30, 2018.


“The board has the right to go forward with charges, if they so desire, against the superintendent,” said Sahradnik. “Also, the board or the prosecutor’s office could proceed with essentially seeking to have his certificate to continue serving revoked. They both require hearings.”

Alternatively, the board could allow the legal process to play out.

“You have charges that are pending that still have to go through the judicial process,” said Sahradnik.

If Uszenski is found not guilty, or the charges against him were to be dismissed, the board could potentially owe him back pay.

In some cases, residents asked whether Uszenski’s pay should have been suspended – specifically, at an emergency meeting. Board President Sharon Cantillo said that a “public outcry” on the matter had been heard by the board.

Resident George Scott asked why the ratification of Uszenski’s suspension without pay could not have been handled at a regular meeting, versus paying attorneys and other professionals to come to a special meeting.

“The bottom line is, from the standpoint of the feelings of the board, they wanted to act quickly to correct and take the action they could take on the indictment without getting into a delay of a period of time,” Sahradnik said.

Business Administrator James Edwards said there was a pay period in between the date of the indictment and that would have raised a question if a vote was not taken.

“If the man goes to trial and proves he is innocent … the board is going to get sued right on down the line,” said Joe Coutant, arguing against suspending Uszenski’s pay. “It’s going to cost us a fortune. The only thing I’m trying to say is, be careful as to how you’re going to handle this.”

“I can sense the wolves ready to just pounce, and it’s really sad,” added former board member John Talty.

Following the board’s vote to suspend Uszenski without pay, the scope of public comment began to widen. One woman, Victoria Pakala, a candidate for the Brick school board in this November’s election, asked how Andrew Morgan was able to obtain a job in the Brick school district despite a criminal record.

“How did Andrew Morgan slip through the cracks?” Pakala, who identified herself as a teacher, asked.

Morgan is accused of helping Uszenski with his plan to provide his grandchild with benefits, and lying on a job application by concealing his criminal record of drug dealing activity in New York in 1989.

“Every employee of the district goes through a background check and is not hired if not cleared through the state,” Sahradnik said.

Previously, state officials have told Shorebeat that Morgan, who was hired by the board on Uszenski’s recommendation, could not have had a criminal record used against him under a waiver he was granted in 1997.

“At one time, New Jersey state law contained a provision that allowed people who were disqualified from school employment to file an appeal, based on demonstrated rehabilitation, to the [Education] Commissioner’s Office,” state Department of Education spokesman Michael Yaple said.

The state law was in existence from 1986 through 1998, when it was repealed, but people who had been granted waivers under the program were grandfathered in.

A side bone of contention developed between some members of the public and school officials after Vito Gagliardi, Sr. – who was appointed to the board in August to fill the vacated seat of John Talty – participated in the meeting and cast a vote over the phone. The members of the public asked if board member Karyn Cusanelli, who had a previous obligation Wednesday night, was afforded the same opportunity.

Cantillo said Cusanelli – like her – would probably not have known that option was available. Gagliardi took it upon himself to notify the district he wanted to vote that way, Edwards would later say, and school officials checked with Interim Ocean County Executive Superintendent of Schools Todd Flora to confirm the practice was legal.

One member of the public, Vic Fanelli, began questioning if Flora could have made a special accommodation for the man he appointed to the board, but Edwards quickly explained that previous case law surrounding the Open Public Meetings Act – specifically, a case involving the state Pinelands Commission – allowed it.

Sahradnik eventually quieted the matter, asking members of the public to keep on-topic to the Uszenski situation.