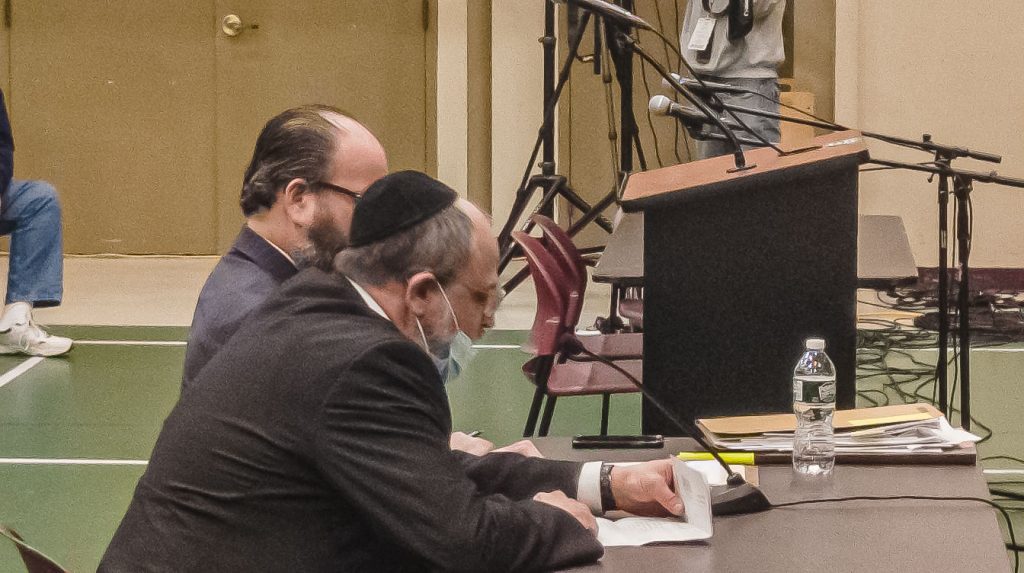 The plan to legitimize an Orthodox Jewish private boys’ high school in Brick Township that operated illegally without a zoning permit for over a month includes a promise not to use school buses for students, limiting the student population to 100 pupils, and not allowing the preparation of food in the Hendrickson Avenue complex.

Attorney Adam Pfeffer began presenting his client’s case to grant an application asking for the township’s Zoning Board of Adjustment to approve the school as a conditional use. The building housed Temple Beth Or, a mainstream conservative Jewish congregation, since 1976. It was purchased by Congregation Kehilos Yisroel, an organization operated by developer David Gluck and linked to the ultra-Orthordox community based in Lakewood, and was quickly turned into a religious high school without obtaining the permits to do so. Brick Township sued, forcing the closure of the school until the matter can be settled. Superior Court Judge Craig L. Wellerson ordered Monday night’s zoning board hearing and expects both sides back in his courtroom tomorrow for a status conference. 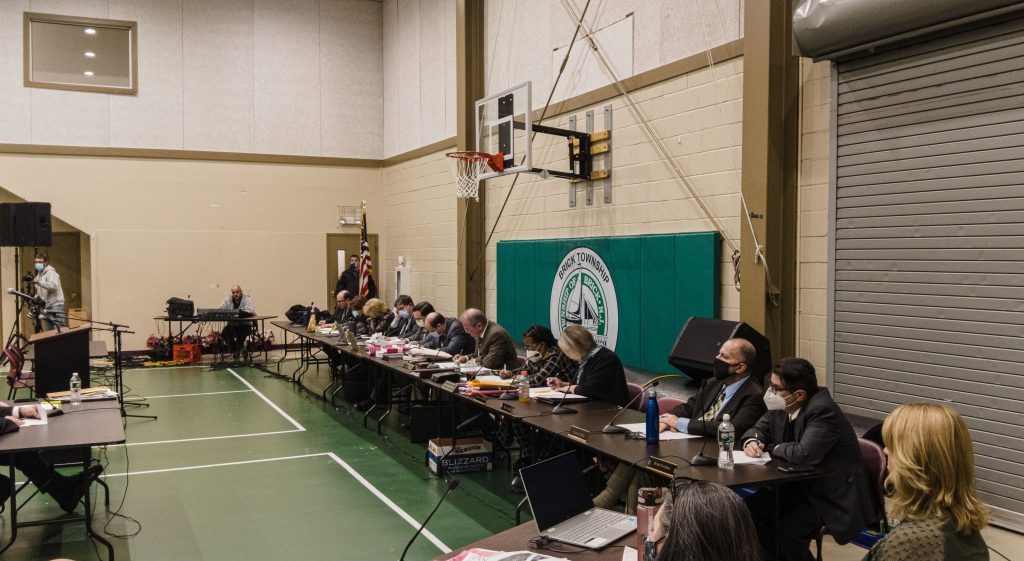 Professionals engage in a discussion at a hearing over a proposed private school in Brick, Dec. 20, 2021. (Photo: Daniel Nee)

The hearing was not completed Monday night. In the quasi-judicial format of zoning board hearings, attorneys call witnesses who answer questions during both direct and cross-examination, if an objector wishes to engage. A group of neighboring residents objecting to the operation of the school hired an attorney, however one of the residents told Board Chairman David Chadwick that she had experienced car trouble on the Garden State Parkway on the way to the meeting and would not be able to appear. It is expected that the attorney as well as a traffic expert will advocate on behalf of the objectors when the meeting is recalled in February.

What Did We Learn?

While no decisions were made regarding the ultimate status of the private school, details did emerge in terms of how it is proposed to operate should it gain approval.

David Pollack, CKY’s first witness, identified himself as the “administrator” of the school, though he admitted he does not have a background in education.

“I have experience in the workforce, but not that much experience administrating,” Pollack, who was also identified as a rabbi by some in the room, said. “I’ve managed a 50 unit building, a 25 unit building – residential buildings – so I’m sure there will be overlaps. I do have that type of experience.” 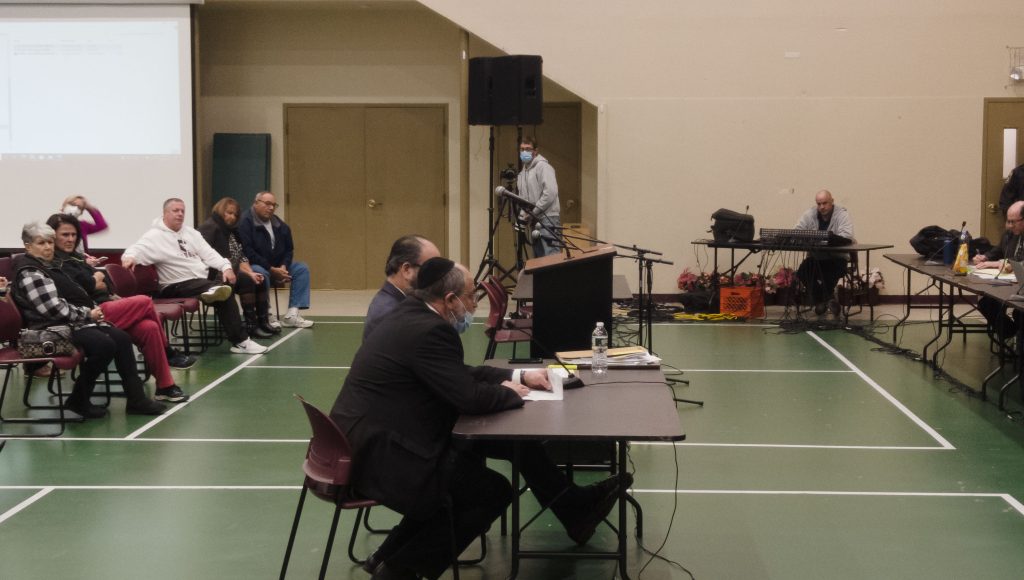 Though the school utilized buses during the short period it was open in the former temple, Pfeffer said that CKY has committed to eliminating bus transportation. Students will be dropped off in five, 12-person vans and the remainder will be dropped off by parents or in car pools.

There will be no food preparation on site; Pollack said meals for students are catered every day and brought to the school either in passenger vans or cars. Meals are delivered multiple times per day.

The current enrollment of the school is about 80 students, and would be capped at 100 students, who would be divided among four classrooms. A typical day would start with a morning prayer, followed by lessons and some break periods for lunch or outdoor exercise. School officials said they would like to add a basketball hoop or a designated recreational area outdoors, however township officials said such proposals should be reflected on the zoning application. Brick officials also asked for clarification as to whether a drainage basin on the property conforms to current statutes and if it encroaches into the state Department of Transportation’s right-of-way.

As with many development proposals that find themselves before land use boards, traffic is one of the primary drivers of concern with the operation of a new high school that is located, essentially, in the middle of a residential neighborhood (though the property does technically border both Route 70 and Van Zile Road).

Justin Taylor, a traffic consultant hired by CKY, said based on data from his clients and extrapolations for future growth, at its maximum of 100 students and 12 staff members, there should be about 45 inbound vehicle trips in a short period of time during the morning drop-off period. Another wave of traffic would come at pickup time, though these are staggered between the 8:30 p.m. pickup and the 9:30 p.m. pickup. In all, the school is expected to generate 77 trips per days, Taylor testified, which does not meet the threshold for a traffic study requirement. 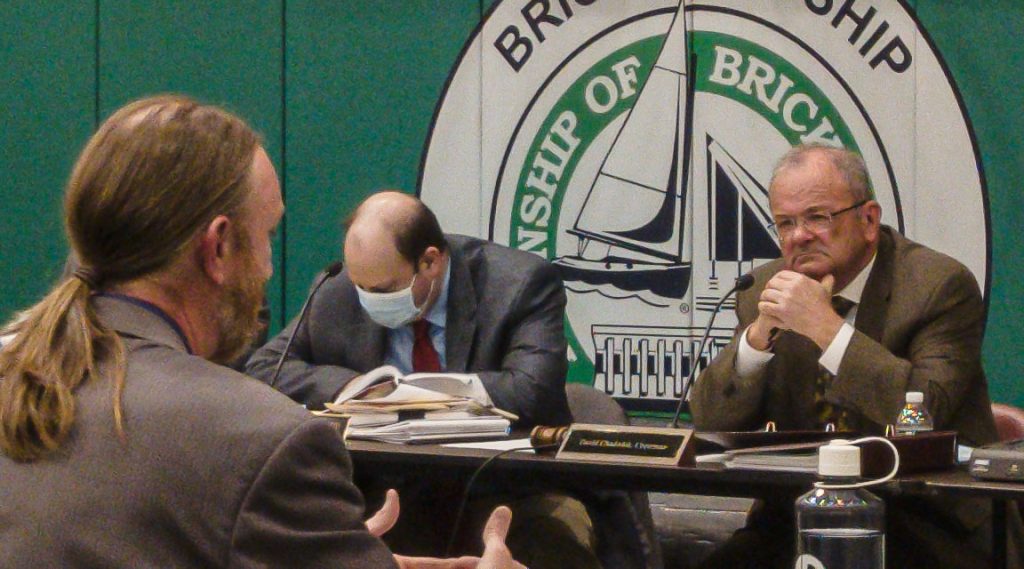 Professionals engage in a discussion at a hearing over a proposed private school in Brick, Dec. 20, 2021. (Photo: Daniel Nee)

Brick officials pushed back on the traffic assessment, also noting that the house or worship on the site will continue to operate – Pollack said about 20 to 40 worshipers attend daily – and research should be conducted to determine the traffic impacts on the intersection of Hendrickson Avenue and Van Zile Road, especially since the majority of traffic will be heading in one direction.

Pfeffer, at the end of the meeting, confirmed his client will conduct a formal traffic report and provide it to the board prior to the next meeting.

Within the property, traffic during drop-off and pickup times will “circulate in a clockwise direction around the parking field and then queue up on the east side of the building,” Taylor said. “What this allows us to create is over 600 feet of stacking in that loop, and that’s without using a double-stack.”

Township officials, while speaking of the parking lot, said they were concerned that a fire truck could not fit in the entrance to the complex without “jumping” a curb, and that there were no zones marked off for fire equipment on the application. Taylor suggested some areas where they could be added, though board members seemed confused as to why the issue was not addressed earlier.

Christine Cofone, an expert planning consultant, testified as to the statutory case that she believes supports CKY’s application.

“We are not here to discuss, ‘does a school use make sense here?” she told board members. “The governing body decided this when they made it a conditional use.”

Indeed, schools are a conditional use in residential zones, however they must met the aforementioned conditions which are spelled out in the state’s Municipal Land Use Law and governed by various court tests. Cofone argued that despite being unable to meet all of the conditions – including locating the school on a main street rather than a low-order residential street – are hardships produced by the oddly-shaped lot, and the traffic issue is largely irrelevant since the same street is already used to access two public schools at the end of the road.

“I would be hard-pressed to say that this school, with an enrollment capped at 80 to 100, would have a deleterious impact on a lower-order street, especially when there is already an elementary and middle school on that same lower-order street,” Cofone said.

Cofone said that, at least in terms of state standards, there is “no substantial detriment” to the community by adding a school – a term that refers to a legal test rather than a subjective determination by neighbors or objectors.

“Even when you’re dealing with non-compliant conditional uses, it does not mean the use is not appropriate for the zone,” said Cofone. “I am really challenged to find a substantial detriment with the variance relief related to this application. The site has functioned quite well and it has previously received variance relief. The school use of this property only adds a handful more to the parking demand, so I don’t see a reason why the board should not grant that request … under the criteria.”

It is unknown how Wellerson will react to the results – or lack thereof – of the hearing Tuesday. He had ordered the matter be resolved at Monday’s hearing, however the volume of testimony, the number of witnesses who must be examined and cross-examined, plus the case that will be presented by an objecting attorney as well as examinations by members of the public, plus general public comment on the application, means the matter could not have been achieved in one night.

Chadwick, the board president, said the application should be heard again in a large setting – Civic Plaza, at 270 Chambers Bridge Road – and offered to dedicate an entire meeting to the application since it is under court review and drawing significant public interest. That hearing will be held at the board’s Feb. 16 meeting, which will begin at 7 p.m. at Civic Plaza.

In the mean time, Shorebeat will monitor court activity and provide updates when necessary.